“The most terrifying words in the English language are: ‘I’m from the government and I’m here to help.'” (Ronald Reagan)

Oftentimes we hear in the United States (US) a bad use of the verb “to give” when in fact it’s meant as a sale. As a Cuban I can assure that this term is erroneously or innocently used in order to refer to the crumbs sold by the omnipresent regime on the island. The same semantic mistake occurs in every country but we will address only the reality in the US. Whether sold or pseudo-free, this fact about welfare constitutes the great Trojan Horse of the governments. They will always give away what is not theirs and whoever comes behind (people) will pay the consequences. The government creates schools, to which their children do not attend; create medical plans, which they would never dare to use, etc. With the action of “giving”, they are actually creating their own system, a system that you do not fit in and therefore you will not participate. The government is not there to be applauded just for doing their job and it is a practically a crime to decorate their job to make it look like a favor. They were chosen to do that, their job. Everything can be summarized with another phrase of the once hated and now “idolized” Ronald Reagan: “Government’s first duty is to protect the people, not run their lives.”

If you are reading this post, you were probably born after 1935, when the “Social Security Act” was created in the US, a law enacted to ease the effects of the Great Depression experienced by this country from the beginning of 1929 until the 1940s; although its origin is officially marked after the election of Franklin D. Roosevelt. President Roosevelt implemented the Social Security law, which wasn’t bad theoretically, however, since its inception it has been as controversial as the Obamacare of our times. Social Security was and still is obligatory. If you are employed or earn a certain amount of money during a year you pay Social Security (another way to pay taxes), it works a little different with the Self Employed or Freelanced workers or contracted but the principle is the same. In the beginning Social Security was intended to operate as a savings account where the person who reach the retirement age after their working years should receive the whole amount previously deducted from the Social Security. If the person died before the retirement age the government kept all the money (Hard to believe but totally true!), at that time there was a surplus for that reason. In this case there is always some smart guys who do the wrong things when it is other peoples’ money (usually it’s wrongly managed).

The Social Security principles have been “degenerating” with the years, the population in retirement age is growing as well as the life expectancy, while the money available for retirement decreases so much that I doubt there will be enough funds to guarantee a retirement for the people who are around 40 or even 50 years of age now. Why? Because the government has erroneously planned and managed that money according with the new life expectations and to make matters worse the list of beneficiaries has extended beyond the people who in the past worked and they paid social security. If you were to retire now through Social Security, you will hardly receive a “percentage” of the money that you have paid throughout these years. They take away a good chunk of the money that was supposed to be received. In few words, Social Security became another “tax” for the Americans.

To be eligible for retirement by Social Security you need at least 40 credits. These credits are “earned” deducting from the person’s income and a person hits one credit every time that $ 1,300.00 dollars is accumulated¹. However, all persons can accumulate up to 4 credits per year. Therefore you need to work hard at least 10 years to “earn” those benefits. Actually the ideal amount of years worked is 35 years or more. It will take an average of 35 years with higher income and the result is divided by 12. If for any reason a person does not accumulate the total number of years, “zeros” will be used to fill the gap of time out of work.

The mature age to do it (at this time) is at 65. Although a person can retire at 62, he or she will receive a lower paid check instead of what the person “deserves”, a lifetime dedicated to work and trusting blindly in the government and it gambles with everybody’s money. It is worth saying that it will be paid, or seems to be the intention, as long as there are sufficient funds or perhaps one day the retirement age will be 80 years or even older².

Whether you are in a limbo regarding the retirement income from Social Security or being certainly sure that you will receive it for the rest of your life, it will not be enough for you when you may be able to replace a cologne by a ton of medicines while waiting for that check issued by Social Security (which may be tax deductible also). 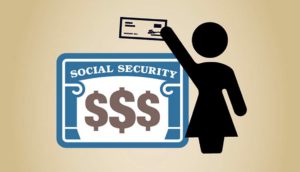 It’s never too late to start investing in yourself, perhaps much better without any “help” from the government. Soon we will be talking about retirement accounts, capital investment, opening of business. In short, how to achieve Financial Independence which is the actual American dream or better said, it is the universal dream.

1. The current value of one credit in 2018 is $ 1320.00.
2. This post addresses only the particularities of Social Security in the United States of America and does not address the particular issue of retirements of government workers, railroad workers, military or any institution other than Social Security.